Birth of a Doula 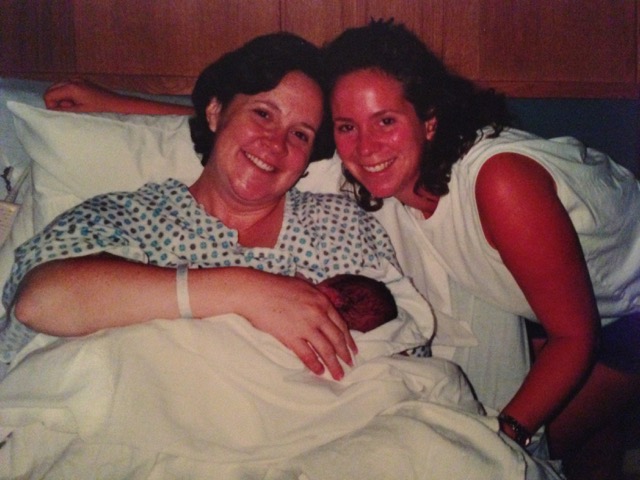 Unlike many doulas, midwives, and healthcare providers I did not have a calling to medicine.  I did not become a doula to fix a wrong or right the world. I simply fell into it. Literally, I fell into it.

I approached a local doula who spoke with me about what to expect and allowed me to shadow her for birth so that I would not be unprepared for Sheila’s birth.   I was welcomed by the doula and a single mom who was giving up her baby to adoption. Aspects of that birth and the mother’s story will forever be with me but it was not that birth that changed me.

August 6, 2000, was my youngest child’s 1st birth party.  Sheila and her family were at the party and none of us were surprised when she started to have irregular contractions. After the party, the contractions continued and once her toddler was deeply asleep we realized this was it! We made it to the hospital at 1230 am on August 7th and the staff was disorganized as we were the first midwife patient at this hospital. As the midwives had received privileges just the day before.

We labored in the hallway until we were assigned a room.  At this point Connor, the toddler, only wanted his daddy after being awoken from a deep sleep so Kevin and I switched roles.  I became the coach and took on the partner role.  It was very obvious that Sheila was making progress quickly and the midwife was not yet in the room.  (We later found out that she was downstairs arguing with security to be let upstairs. But they had not been informed that she privileges at the hospital.)

The nurses asked for a urine sample and so we labored on the toilet until suddenly her bag of waters broke, and the baby started to arrive.  I called out into the hallway for staff as he was quickly crowning.  I assisted her upright so that she was standing over the toilet and then I assisted in his entry as there were no staff in the room yet.  The midwife and nurse arrived in time to assist with his feet and we had her walk to the bed with the baby in her arms.

I will forever remember the moment when I realized that I was going to assist this birth. The moment I saw him crowning and I debated whether to use bare hands, a towel, or try to look for some gloves.  I remember the feeling of his hair and scalp in my bare hands.  His ears as they emerged and his wet shiny body in my arms and then into his mother’s arms.  I remember looking into his eyes and feeling shaken to my core by him and the power in her.

That moment changed me. It was a major paradigm shift deep in my soul.  I was able to witness and support Mother Nature and simplicity at its best.  I was able to bear witness to Sheila’s strength and power as she opened and became more.  I was honored and blessed to be present and able to bear witness to this birth. It was almost like a light came down from the sky and smacked me on the back of my head saying “Hey! This is what you’re supposed to do.  This is where you are meant to here doing this. Now do it.”

The birth high from Sheila’s birth lasted for a very long time.  Its propulsion ends me into further training, finding a mentor, and asking questions of myself, mothers, and providers.  Cole’s birth was my impetus for this work.

In the beginning, I attended births for friends and select students as my kids were young.  As my kids entered school full time, I began to attend more birth and even more births.  One day I started counting, 300, 400, 500. Then I stopped counting until recently. Last year I had attended 900 births and actually I just attended my 1,000th in April 2016.

To celebrate 1,000 births, I am now training other doulas on this blessed journey.   To join a workshop and learn how to become a certified doula visit BirthYouDesire.com

← Metropolitan Breastfeeding gets an Award I did it!  →