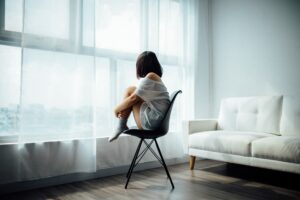 Photo by Anthony Tran on Unsplash

She called me at eight weeks and told me that they had heard two heartbeats! Twins! Twins after all their trials in trying to get pregnant. This was a gift and a blessing after all these months of trying. “We are excited, terrified but we are so grateful”. So, they asked, “How do we prepare for twins?” and we started planning for twins.

Two weeks later, she calls in in tears, in denial, in grief. Where there was two hearts beat, there was only one now. Where there were two sacks, one is not growing, not developing.

Vanishing Twin Syndrome is a term for early loss in a twin pregnancy- where one twin is miscarried but the other continues to live and grow and thrive. It’s a strange dichotomy where both life and death coexist simultaneously in the same uterus. It is reported in 20-30% of the time in multifetal pregnancies (twins, triplets, etc.).

Unlike a ‘miscarriage’ in the traditional way, with a vanishing twin there can be a lack of bleeding and symptoms. Some women report uterine cramps or pelvic pain and others do not. Instead, the cervix stays closed for baby A. So the remains of baby B are absorbed by the other twin, the placenta, or the mother. Hence “vanishing” in the first trimester.

“Vanishing”. What a cruel term.

The causes of the miscarriage are often unknown. It is suspected that most miscarriages happen due to a chromosomal abnormality. We typically inherit 23 from our maternal line and 23 from our paternal line. Thereby making up the 46 chromosomes in every cell in our bodies. Random fluctuations in genetic material can be the cause of the miscarriage. Sometimes there are combinations 45 or 47 instead leading to loss. Variation is a part of life affecting our eye color and hair texture. Similarly, it even affects sperm, as one of every seven sperm is genetically and structurally incomplete.

Miscarriage may be rare with one in five women will experience it. But is it really?

Pregnancies that make it past thirteen weeks typically do well. The risk of miscarriage at this point it less than 4% and continues to decrease to less than 1% after twenty weeks.

In conclusion, despite all of these facts and the analysis. Nothing reduces this family’s anxiety and worry until that blessed day that she holds baby A is in her arms. A complete whole being. A baby girl.

Still today, years later, she reached out. Her Even grief is still fresh. It crept up after seeing twins in the store. What could have been had there been two?