How to Survive Flying with a Lap Toddler 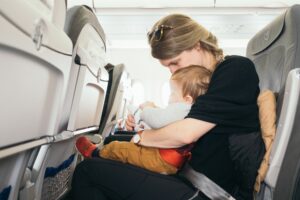 How to Survive Flying with a Lap Toddler

I thought that flying with a toddler would be tough until we found out that I would have to fly ALONE with our daughter Sarah as my husband had an urgent and unavoidable work commitment. Hubby’s family lives across the pond and was understandably disappointed that they missed Sarah’s first birthday as well as her first Christmas so we were reluctant to cancel the trip. I decided that I would keep my daughter on my lap during the flight and despite a few minor issues, the overall experience was positive – for both of us.

Guidelines for flying with a lap toddler: What worked (and what didn’t)

I feel that I should stress that not all babies are the same and not all moms are the same which means that what worked for us might not work for you. Also, I got a lot of these ideas from reading a LOT of blogs and articles so I can’t take credit for them, although I did tweak them according to what I felt would work best for Sarah and me.

Worked: Picking a seat at the back of the plane

The seats closer to the front of the plane are quieter than the seats at the back which might seem like a good option when you’re traveling with your baby. However, seats at the back of the plane provide you and your child with a little extra space to move around, and most importantly, you’re closer to the bathroom! Since Sarah is a budding walker, I figured that it would be wise to get an aisle seat and it made a huge difference.

Did NOT work: Bringing a lot of small toys

Toddlers have short attention spans (understatement of the year) so I figured I would bring along as many of my daughter’s toys as I possibly could to keep her distracted for as long as possible. Unfortunately, she got bored of them pretty quickly and wanted something new. Luckily, I had also packed some coloring books and stickers – I got the idea from a guide on good airplane activities for toddlers. She was absolutely fascinated with her new puffy stickers, giving me time to just catch my breath and relax.

Worked: Filling my tablet with my baby’s favorite shows

My husband and I are pretty active so we decided to drastically limit baby Sarah’s TV time right from the start. When we came to know that he would not be able to travel with us, we agreed to increase her allotted screen time just for the flight. I filled my tablet with her favorite shows and packed headphones for her – we did a test run for an entire week before we left so that she would be comfortable using them during the flight. We took short breaks in between to make sure that she didn’t strain her eyes and it worked like a charm.

Did NOT work: Carrying a nursing pillow

I thought that I would pack my nursing pillow but I soon realized that it would be a pain to carry. I’m glad that I didn’t because once I was comfortably settled in, I realized just how bulky it would have been considering our tiny airplane seats. I have been using the baby wrap since Sarah was 3 months old so I decided to go with that instead and it worked.

The price difference between a direct flight and a connecting flight was over $200 so I was tempted to book a connecting flight. Sarah was surprisingly un-troublesome throughout our 10+ hr flight so I think that it’s possible we would have survived a flight with a connection. Even though it “sticks in my craw” (picked that up from MIL) I have to admit that a direct flight was a good idea since it reduced our travel time.

Did NOT work: Carry double the baby necessities

Several moms recommended packing double of everything – twice as many diapers, wipes, baby clothes, blankets, bottles, formula, snacks – EVERYTHING! I wasn’t too sure but decided to err on the side of caution and went along with it. What I learned is that it’s definitely wise to carry extras but you don’t really need to carry double of everything. However, you should definitely pack an extra top in case your baby throws up.

Worked: Nursing during takeoff and landing

It’s common for your ears to get blocked when flying but yawning or chewing can get rid of the annoying sensation right away. Unfortunately, that’s not something that you can convey to your toddler so the best option is to nurse your baby during takeoff and landing as the sucking motion helps to prevent this problem. I would recommend that you pre-board and get settled in your seat so that your little one doesn’t make a fuss and refuse to feed.

Flying alone with a lap toddler turned out to be easier than I expected but it wasn’t exactly easy either. Sarah constantly wanted to run around and explore and I had to focus on keeping her entertained and content. I packed plenty of snacks for both of us and I would definitely recommend you do the same. Diced fruit is a great option – I’m currently on a keto diet for my fibromyalgia, so I enjoyed a bowl of low carb fruit while Sarah munched on whole-grain crackers smothered in applesauce. Luckily, my husband was able to join us later and it turned out to be a pretty great trip… and on our flight back, I finally got to nap!

Author’s Bio: Anita Fernandes has been writing extensively on health and wellness for over a decade. She has expertise in nutrition, fitness, weight loss, and holistic health and has contributed content to a variety of leading digital health publishers. Anita has a unique perspective on healthy living and lifestyle, as she has battled and overcome eating disorders and obesity. She shares her experiences in an effort to help others overcome the physical and mental health problems that can sometimes seem insurmountable