How Ashley Came to Doula Work

It’s the most common question asked by everyone I meet. Whether it’s the people I support, 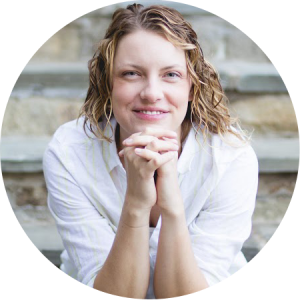 talking to new friends, at a holiday party, on a date. Everyone asks me:

“What brought you to doula work?”

Over the years I’ve listened to myself answer this question and heard the evolution in my response. It used to be a short, “I volunteered doing something I loved until it became a job.” I added more and more to this answer. As I have gotten older, I have reflected on how I arrived at this point. Here’s the full story.

I love women. They lead, struggle, rise up and break down. In college, I took classes like “Women in the Bible” and “The Sociology of Families.” I studied goddess worship in Mesopotamia which also lead me to read the Sufi poet Rumi. I interned at Planned Parenthood, performed The Vagina Monologues, and organized Take Back The Night rallies. At the beginning of my last semester of undergrad, my academic adviser informed me I had inadvertently earned a minor in Women’s Studies through my chosen electives. I had literally specialized without even noticing. It was that easy. I feel personally empowered by living a healthy life and helping others. During my summer and winter breaks from college, I worked at a homeless shelter. For several years, I organized annual World AIDS Day for the county which included being trained by the local health department to be a peer sexual health educator.

I wanted to change the world. Health and gender would inevitably be part of that.

So to Washington, DC I went where I earned a Masters in Public Policy with a concentration in global medical policy from George Mason University. I studied abroad in South Africa where I researched maternal and newborn health and transmission and treatment of HIV/AIDS (as well as elephant sanctuaries!). I was enthralled in maternal health and the systems that challenge women in their communities. Everything from access to clean water to malaria bed nets. I wanted to learn it all. 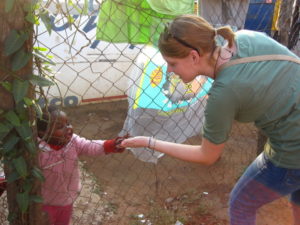 I graduated and began working for an international NGO assisting maternal health programs throughout the world. It was soon after the earthquake in Haiti, there was civil unrest in Liberia, and South Sudan had recently become a country. It was then that I learned the serious global need for midwives. Rebel soldiers might be patrolling the streets, the earth may fall out from under us, and getting clean water may mean the risk of a sexual assault on the long walk to a well – but life goes on. Women go on.
Skilled birth attendants are needed everywhere and they are so desperately lacking worldwide. My best guess as to why, is we do not value the wonderful and beautiful strength and vulnerability that every woman and girl possesses. It is not an exaggeration to say, I became obsessed with this power. I had to learn more and do more. I became curious that if this was the state of affairs globally, what was it like in my country in the developed world?

I asked around. I learned the word “doula.”

I shared this list with a close friend at a Happy Hour one evening. She excitedly shared that a co-worker of hers was an abortion doula. Obligated by my list, I asked this abortion doula to coffee. A month later, I was a trained abortion doula with the DC Doulas for Choice Collective. I still remember the faces of women I supported during my shift at the clinic. I still remember their stories. I went home, emotionally and physically drained to be sure, but alive. It was like I had finally silenced a ringing in my ear. I had finally said, “yes” to a nagging voice that had been calling my name for years, not knowing where it was coming from. Several months later, I attended a 3 day workshop to become a certified birth doula. By the time I turned 27 years old, I had held the hands of over 30 women as they terminated their pregnancies. And supported 4 families in the birth of their babies (all girls).

I have friends who are clergy and have heard them describe their “calling” when we were younger in college. After seminary, they again used the term when sharing news  – “I was called to such and such church” as they were hired to be pastors. I supported births on and off for the next two years. Eventually enough families were coming to me for birth support that I had no choice but to answer my call, to leave my health research job and become a full-time doula.

I’m humble enough to reluctantly compare myself to a member of the clergy. But I also read enough of the Sufi poet Rumi to know that we are instructed to “Respond to every call that excites your spirit” 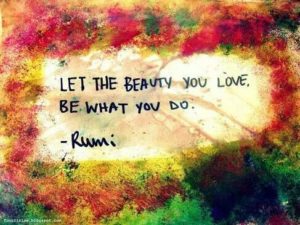 On average, I support 4 births per month and volunteer at a local women’s health clinic supporting people through their abortions. I am privileged to be 30 years old and am spiritually fed by my career. I continue to turn to the poet Rumi for guidance when I am hungry for answers in my life. I consistently come back to this: