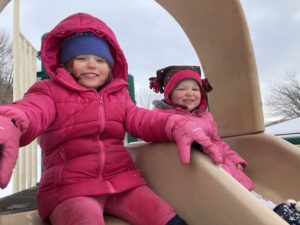 I started with labor at about 4 am on Friday. My contractions were actually fairly regular, but not very strong, 1 minute long, every 5-6 minutes.  This lasted until about 7, at which time they were slowing down to every 7-15 minutes.  I decided to go to work (I walk to work, so I thought it would be good!) and take care of a few things since active labor might happen soon!  The fairly weak contractions continued their sporadic 7-15 minute time course, also varying in duration.  I bounced on my ball at work for a couple of hours, then decided to work from home for the rest of the day (my boss is pretty chill and I was one of two people actually at work anyway!).

Around 11:30 am everything was still sporadic in timing, but I was getting the occasional stronger contraction, so I contacted our doula, Lynn, to give her the head’s up.  She also suggested that I contact the midwives so that I was on their radar.  I talked to the midwife on call, she told me to eat, rest, and go about my day, which I did.  I was done with work around 4 pm, which worked out well because that is about when contractions started picking up!  Contractions were solidly 7-10 minutes apart and 1-1.5 minutes in length.  Andy and I went for a walk, and my contractions started increasing in strength.  I could still talk through them, but I had to stop walking and just breathe.

This continued until around 11, at which time I took a hot shower and tried to lay down.  I was able to fall asleep for 45 min-1 hour stretches for 5-6 hours (I thought it was longer, but Andy assured me I didn’t sleep quite as much as I thought.)  Saturday morning things were starting to get back on track of timing 7-10 minutes apart, 1-1.5 minutes in length, but were not really increasing in strength at all.  I decided to rake the leaves in the yard, took a short nap or two, then we ate lunch, and went for a very long walk.  About an hour into the walk I started having some contractions that were much stronger. I told Andy, my partner,  “I understand why some women get pain meds, this is going to really suck.”  When we got back from the walk, the very strong contractions ended.  At around 4 pm I was getting pretty discouraged because we have been at this for about 36 hrs with what felt like no real progression.  At this point, Andy decided we should consult google, and we ended up doing some nipple stimulation.  This really changed everything.  Contractions were getting much stronger, and in the 5-7 minute apart, 1-1.5 minute in length zone.

After a few hours, things were very staying consistent in timing and increasing in strength.  At some point over the next few hours, I spoke with the midwife on call and Lynn (our doula).  The midwife knows Lynn well, so wanted to have her help decide when we had progressed far enough to go to the hospital.  Andy was putting a lot of counter pressure on my back at this point during contractions to help with the pain.  Lynn came to our house to help around 10 pm.  After an evaluation of the situation, she did some positions to help move the baby down more, including shaking with the rebozo!  That was crazy!  Lynn told Andy to go take a nap for a bit, and she stayed with me in the living room, helping me through contractions.  During this stage, various kneeling positions and sitting backward on the chair were the best for me, as it gave her access to my back for counter pressure.

About an hour later, apparently, things got much more intense.  I got in the shower for a bit but was running out of energy to stand.  After the shower, Lynn thought it was time for us to head to the hospital, so we left!  The car ride was rough, I couldn’t exactly figure out how to be comfortable in the back seat because it was very uncomfortable to have my legs close together.  I ended up sort of kneeling/hugging the seat with one knee on the ground and one on the seat.  It was so nice that we had done a practice run to the hospital because Andy was able to yell out landmarks on our way that helped me focus and know where we were.

When we got to the hospital I should have taken the “jump bag” with me because it had all the paperwork in it.  The lady at the desk wanted me to sign everything again but that was not happening…so I just waited for Andy to get back from parking the car.  Make sure you take the paperwork with you!

When we got into our labor room and I had my first exam it was around 12:30/1 am and we were excited by the progress, I was 7 cm, completely effaced, and -1.  The baby wasn’t sitting quite right, something about a bad head angle and Lynn did some things to help the baby adjust.  They started filling the tub at this point, but I was told it would take a while.  (I had plans to try to labor in the tub, but not necessarily deliver.)  We tried the shower again at the hospital since there was a seat, but I was just too cold and shivering made the contractions worse.  I spent a little time laboring in bed and then moved to the tub.  THE TUB WAS AMAZING!!!  I was in there for a few hours, and it made things much better.  I really didn’t have much time between contractions at this point, but the few times I managed to take a break and float in the water provided some much-needed relief for my back and legs.  I had another exam in the tub, but I don’t remember the numbers at that point, but I had a “bulging bag of waters”.  What I do remember, is that the contraction just following an exam was MUCH stronger.  I don’t think I knew that going in.

After the tub, I spent a little more time laboring in the bed, which I preferred to do in the kneeling position.  At some point, I was told to try to flip over and try some contractions sitting so they could do another exam.  At that point, I was 9.5 cm, and the midwife decided to massage the lip on the next contraction which easily put me to 10 cm.  There was a point around there where my fore bag broke and showed light meconium, but then the midwife had to break my hind bag and there was apparently a lot of meconium.  At this point, they did tell us that members of the NICU staff would be present at the birth to check her out immediately because of the meconium.

At that point, they set everything up for me to start pushing.  I was surprised to realize that the labor and delivery nurse, not the midwife, was the person who coached me through much of the pushing phase.  She told me “at some point we are going to stop so I can go get the midwife.”  That actually didn’t take very long, I was only pushing for about 40 minutes total before Ella was born.

One of my fears in the whole process was tearing, which I had discussed with Lynn.  She told me that it was very important to do exactly what the midwife said in terms of when to push and when not to push.  Following orders were something that I tried to keep in my head at this point, even when Ella’s head was sitting in an uncomfortable place as they spread oil on her head.  I was told to have small pushes at some points and big pushes at others, which I tried to do to the best of my abilities.  (That whole relax the jaw thing was very hard though…I really couldn’t figure out how to relax my jaw while pushing out a baby!  As I am writing this, I remember that I was supposed to push my tongue into the roof of my mouth, I probably could have used a reminder for that.)

Ella was born and Andy looked to tell everyone that she was a girl!  Her umbilical cord was extremely short, so they placed her on my belly.  She cried almost immediately, and I remember a male nurse/Dr. from the NICU staff come over, say she was crying so all was good, and then they left.  The labor and delivery nurse was repeatedly suctioning her mouth as she was crying and coughing up the goop from her lungs.  Within just a few minutes the umbilical cord stopped pulsing and Andy cut her free so that she could be placed on my chest.  We were not, however, allowed to try to breastfeed because they feared she could aspirate more fluid if she tried to suck while still doing all the coughing.  I was surprised that the midwife asked me to push again to deliver the placenta after what only felt like 5 minutes.  That was super easy compared to the baby!

The midwife asked if we wanted to see the placenta, and of course, Andy and I were super interested because we are scientists!  I would highly suggest having someone show and describe that cool organ that you grew!

I was able to hold Ella while I had a few internal stitches (no perineal tear, yay!) and Ella had continued suction for her lungs.  Andy was able to have some skin-to-skin time as well in the first hour or two.  At this point, Lynn took a few more pictures for us and went home.  When the pediatric team came in for her HepB, vitamin K, and other first things, they were concerned about her nose flares, high breathing rate, and continued coughing.  At that point, they called back NICU and they decided that she needed to leave us.  Andy went to the NICU with Ella, and I tried to rest.

I needed to get up to go to the bathroom before I was allowed to move rooms, but I was light-headed when the nurse tried to get me up the first time because I hadn’t eaten much there at the end of labor.  I tried to use a bedpan as well, but it was extremely difficult to try to use my bladder after everything that just happened (apparently it is common for your bladder to be bruised after labor), so she ended up draining my bladder with a catheter.  Personally, I think saying yes to that was the best thing I could have done…I felt so much better after my bladder was empty.  (I have never had a catheter before, but honestly, it was no big deal.)

Once Andy came back from the NICU we moved to a postpartum room and then started our treks back and forth to the NICU.  They were not going to allow Ella to eat for at least 24 hours, so they brought me a pump and had me start pumping every 2-3 hrs.  We then started breastfeeding on Monday afternoon.  I was discharged on Tuesday afternoon, at which point we checked into a hotel within walking distance.  I continued to breastfeed except once overnight, at which time they had donor milk to feed her.

We were all finally able to come home on Thursday afternoon!  Andy said it was perfect timing because she got to experience her first car ride in DC rush hour 🙂

The birth story was written by Jackie K. Jackie is now the proud momma of two BYD babies.