A Doula’s Reflections on a VBAC

A Doula’s Reflections on a VBAC

Melissa and I met about 3 months before her estimated due date. She came to me with the goal of a vaginal birth after a previous cesarean (VBAC) emotional about her 3 year old daughter’s birth which she described as traumatic. She was now fiercely devoted to birthing her second daughter via VBAC! However, we had a few challenges to overcome. Due to insurance limitations, the family still had the same OB provider and was delivering at the same hospital where her last traumatic birth had taken place. Also, Melissa is an otherwise healthy, plus-size mom with gestational diabetes. With this justification, her doctors were not allowing her pregnancy to continue past 39 weeks. Heading into and still even after the birth, I believe our collective largest challenge to overcome was the feeling that no one except Melissa, her chiropractor and I had the confidence that she could give birth to her baby vaginally. Her doctors had her scheduled for a repeat c-section and her parents and husband continued to say, “Whatever happens, happens.”

Every cervical check she had during the last four weeks of her pregnancy, Melissa’s baby was flip-flopping her position rotating from breech (butt first) to vertex (head down)! After her mention of hip pain, I recommended she see a prenatal chiropractor which I believe had a great impact on what was ultimately, a head-down baby!

Melissa was a tremendous advocate for herself and her baby by pushing the date of her surgery only 4 days shy of her estimated due date. Melissa’s repeat c-section was scheduled for July 29th. We had until then to have a vaginal birth. So the week before her scheduled surgery, I suggested everything I could think of for natural induction: walking, sex, cuddling, relaxing, massage, acupuncture, date fruits, red raspberry leaf tea, more walking, more sex, etc. On July 27th she had an appointment to have her cervix checked so we talked on the phone the night before about how this appointment could go a lot of different ways with augmentation, surgery, etc. We role-played several of the scenarios and I answered as many questions as I could, reserving the appropriate ones for her doctors. The next day, at 10 am she was examined and found that she had dilated 3 cm in the past week!  This gave the OB enough confidence to let her attempt a VBAC! Melissa was relieved and instructed to eat lunch, gather her bags from home and return to the hospital for admission, which she did after taking a long walk, eating a high protein meal, and doing several Spinning Babies inversions to get her baby engaged!

Once she and her husband arrived at the hospital, they ended up waiting in triage for nearly 8 hours being that she was not laboring. Melissa took this time to speed walk the hallway and staircase to stimulate labor on her own! She ate a granola bar for dinner and at midnight was finally admitted to an L&D room where she was started on Pitocin going up in increments of 1 every hour while she slept.

At 9am the morning of July 28, I arrived. Pitocin was at 10 and she was contracting every 5 minutes. Melissa’s parents arrived shortly after me at which point I noticed her contractions entirely stopped so I brought her a cup of black coffee and elevated her into the throne position with the birth ball between her legs. Her parents left after a 20 minutes visit and contractions slowly resumed. As a doula, it is fascinating for me to witness a woman’s body to accommodate visitors in her labor room.

Melissa was checked at 10:15 am and was found to be 4cm, 50% effaced, and -3 station. The baby was difficult for the nurses to find and keep on the external fetal monitor (EFM) which aggravated Melissa since she wanted to move about. She was happy to be untethered by any chance she had and took her time when she went to empty her bladder. When we waited for the nurse to return to put her back on the EFM, Melissa would sit and roll her hips on the birth ball encouraging her baby to wiggle into a good position own into Melissa’s hips. At 11:30 am, her Pitocin was increased to 12 with her belly binders wrapped around her EFM to keep them steady.

By 3 pm, contractions had intensified coming every 2 minutes and she was no longer able to talk through them. Pitocin was increased to 15 and Melissa was excited that birth was imminent. At 3:20, Melissa moved to sit on her birth ball, hula-hooping her hips while holding her husband’s hand and I gave pressure on her back with a tennis ball. Contractions were now coming more intensely about every 90 seconds and Melissa was feeling them deeply on her cervix.

In between contractions, Melissa and I discussed what the epidural decision would look like since the nurse had suggested it multiple times by now. Melissa had told me earlier to not argue or push her when she asked for it; she did not need a code word. She had carefully thought this decision though ahead of time and know she’d rather use the epidural to conserve her energy for pushing than have a repeat c-section. So when at 4:15 pm she asked for an epidural, I fully supported her and the nurse started a bag of IV fluids. She got back in throne position feeling nauseated and a little rectal pressure. When she vomited, I was increasingly confident in her ability to vaginally birth this baby. This baby was on her way!

At 5 pm, she received the epidural but not before the baby had a couple of heart decelerations with contractions. At 5:30, variable decels with contractions continued. Melissa’s first birth turned into a c-section when she was 9cm dilated and her daughter’s heart rate decelerated too much for the doctor’s comfort. If this now turned into a repeat c-section, my concern was Melissa would experience this as a repeat trauma. I had learned that decels during contractions were different from those that occurred just before or after a contraction. These decels were often indicative of babies who were posterior and trying to spin into a better position for birth. So when at 6 pm after all the symptoms of transition Melissa was checked at 6cm, 100% effaced, -1 station, I suspected this baby was trying to flip herself into an anterior position.

Melissa was increasingly anxious as the conversation was increasingly about another c-section and she was asked to sign a consent form. When the OB and the nurse left the room, I explained to her my theory of her baby’s position and she let me rotate her body entirely to her left side almost on her belly and put her leg up on the hospital side table (since she couldn’t move it with her epidural). The next contraction, no deceleration; in fact, the baby’s heart accelerated. We held this position for 6 contractions and no decels at all! Success! The temperament of the room completely changed. At 6:50, the OB checked her at 8+cm, 100%, 0 station and increased Pitocin to 18. A few variable decels continued, and the new OB that was now on-call administered an amnioinfusion at 7:20 pm. Twenty minutes later, Melissa felt some rectal pressure. After two decels the new nurse and I helped her into side-lying with the left leg on table again. We gave her the oxygen mask sipping Powerade zero. Again after six contractions, no more decels. The baby was working with us!

At 8:30 pm, Melissa was completely effaced and dilated and Pitocin was turned off. Her OB then said to her, “I’m very conservative with VBACs so I will only let you push for 4 hours.” Later Melissa said she thought there would be no way this cut-off would apply to her. But 3 1/2 hours later, Melissa was still pushing switching between lying on her back and on her left side. The nurses kept saying “almost” and “I can see the head” and “it will be soon.” The OB came in to observe some pushing and calmly said to her, “You still have a ways to go. Let’s see how the next half hour goes and then reevaluate.” Melissa was distraught. The doctor left the room and I leveled with Melissa, “What do you need?”

She answered, “I know no one can tell me this, but I just need to know when it will be over. When is ‘soon’?”

“Melissa, your baby has been flipping for the past month. You did not go to the chiropractor for 4 weeks, stand on your head in all those crazy positions, labor for the past day, and push for the last 3 1/2 hours to go in for another c-section tonight. This baby IS coming out! You are pushing this baby out! I want you to see how close you are.” 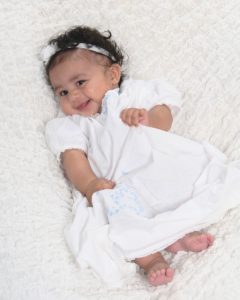 I rolled the full-length mirror up to her bed and said, “Next push. You’re going to see what we’ve been seeing for the past hour. You are so close! Three or four more powerful pushes and she’s here!”

Melissa was crying and agreed, “Okay.”

“In between contractions, I want you to breath in the oxygen mask deeply and imagine her lying on your chest.”

Then with the next push, Melissa curled her head around her body, opened her eyes, saw her baby’s dark hairy head in the mirror. She yelled, “Oh my god. I see her!”

Melissa’s baby girl was born with her umbilical cord wrapped once around her neck at 12:15 am on July 29, 15 minutes shy of the cut-off time.