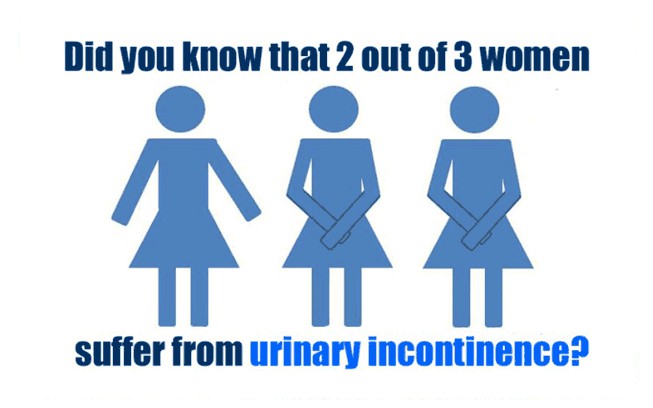 You are not alone if you suffer from Incontinence.

At the 2012 London Olympics, almost half of the athletes competing were women. As women’s participation in sports continues to increase, the importance of understanding common women’s health issues in the sports environment becomes more important for all clinicians. Women’s health is a complex topic as biological factors are influenced by behavioral and societal influences. As you have seen in the cardiology article, women have been traditionally overlooked in medical research; however, a greater awareness of women’s health issues is developing. The special needs of the female athlete, and females in general, deserve more consideration.

THE PELVIC FLOOR:
Think of the pelvis as the bowl-shaped arrangement of bones, including the flat bone in your lower back (sacrum), all the way around to the pubic bone in front. To understand how complicated the strength in this area is, we need to realize that there are 30 muscles involved, mostly attaching the pelvis to the lower extremities. The pelvic floor muscles (PFM) form the bottom of the bowl and help support the bladder, uterus and rectum. To function normally, the pelvic floor needs to be able to both contract to maintain continence and relax for voiding.

All muscles function best at their ideal resting length. The pelvic floor can be weak due to muscles being too tight or too lax. In order for the pelvic floor to function well, muscles of the pelvis and lower extremities have to be balanced in their tension. Individuals with low back pain have a significant decrease in pelvic floor function compared to individuals without low back pain. So pelvic floor problems can originate from the low back, sacrum, hips, knees or ankles. Later in this article, we’ll talk about ways of improving awareness and control of the PFMs. Any weakness or imbalance in the low back, muscles, or legs can cause…

PELVIC FLOOR DYSFUNCTION (PFD):
This refers to any impairment of muscles, nerves, connective tissue, or cooperative function of all of these, that interferes with normal pelvic floor function — proper bowel and bladder function, back/pelvis stability, and sexual function. The main complaints people have when there is dysfunction, are incontinence and prolapse. Today, we will address the incontinence issue.

INCONTINENCE:
Urinary incontinence occurs in many women, but most are too embarrassed to talk about it. It is defined as involuntary loss of urine and has wide-ranging consequences, including decreased involvement in social situations and overall decreased quality of life. It is common in the general population and affects many young female athletes, whether or not they have experienced childbirth, which generally increases incontinence. Even in the young female population, aged 15 to 39, over 50% have incontinence, but only 20% seek help. Women typically wait 8 years before telling a physician. But why wait? Improved pelvic floor function can change your life.

Incontinence can be described as stress incontinence or urge incontinence. Stress incontinence is the involuntary loss of urine with increased abdominal pressure, which exceeds the forces that close the urethra. Examples would be leakage with running, jumping, coughing, sneezing, or laughing.

Urge incontinence, on the other hand, is the loss of urine with a strong urge from bladder overactivity or instability. This is more of a nerve interpretation problem than a strength problem. It is caused by inappropriate nerve signals to the bladder or from the bladder, poor voiding habits such as frequent voiding or soft tissue restrictions. In the female athlete, urge incontinence can develop from imbalance of certain abdominal muscles relative to others, imbalance of muscles at the level of the upper inner thighs, or low back problems, since that is where the nerves to the bladder originate.

PHYSICAL THERAPY CAN HELP!
Exercises to establish as normal and balanced a pelvis as possible and re-education of the pelvic floor in relationship with the other core trunk muscles can help improve incontinence. Gradually increasing pelvic floor strength can be done with the use of biofeedback. Education on proper bladder habits and a review of fluid intake and diet need to be considered when addressing bowel and bladder dysfunction. Manual therapy can help improve muscle balance of the spine and hips. Modalities such as electrical stimulation can be considered to stimulate muscle contraction using internal electrodes for stress incontinence or to inhibit unwanted bladder contractions for urge incontinence.

Visit Restore Motion for other important info about pelvic floor issues, including the very common problems of the bladder and uterine prolapse.