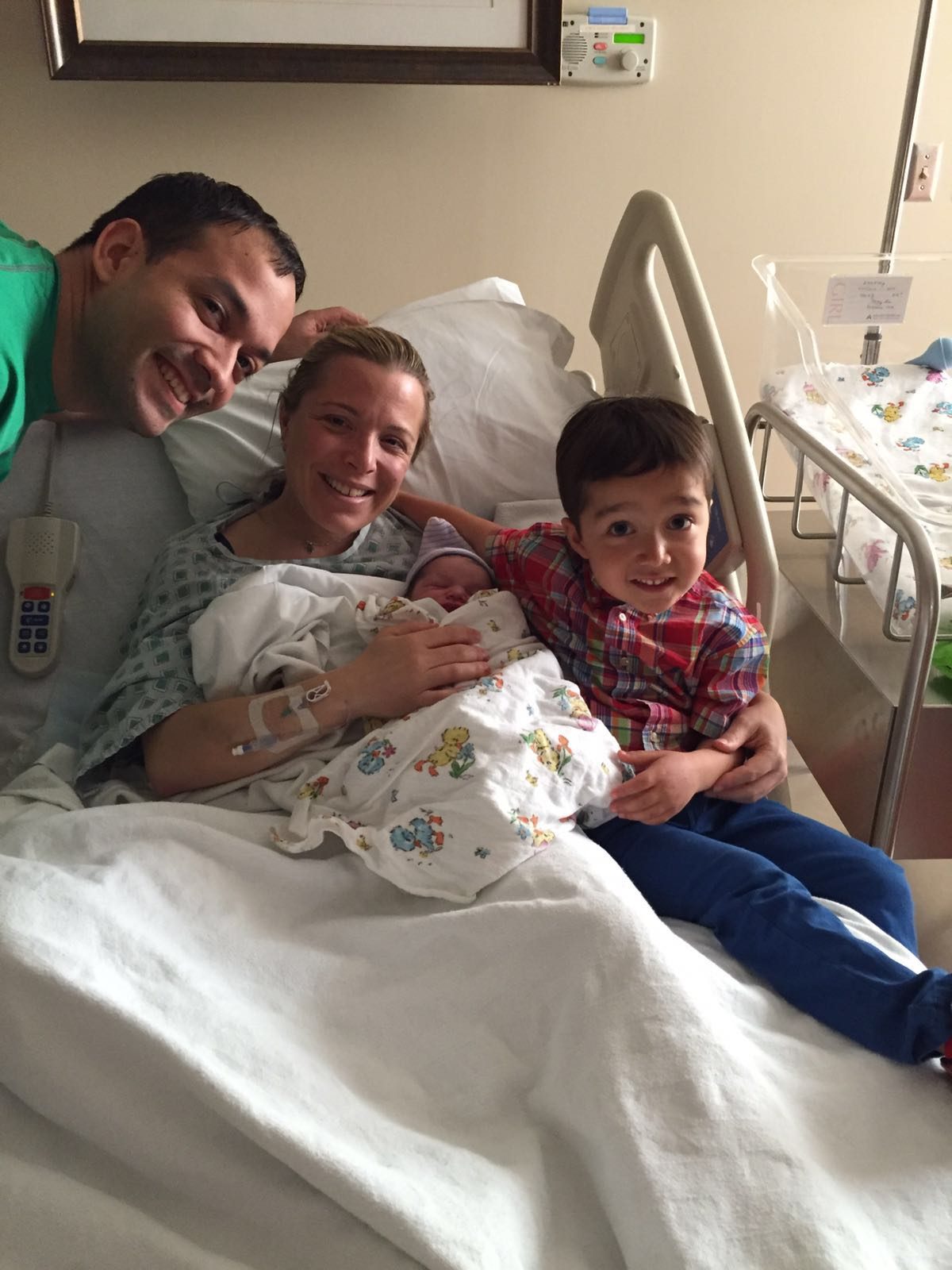 When I found out I was pregnant with my son five years ago, I began an incredible journey into women’s health, pregnancy, and motherhood.  I read everything about natural childbirth I could get my hands on. My husband and I took a great childbirth class taught by Ursula. I prepared myself the best way I could mentally, physically, and emotionally for a great natural unmedicated childbirth. However as I would soon learn, even the best-laid plans can go awry. After a relatively easy and healthy pregnancy, I struggled through a 48 hour labor that ended in a c-section. I was crushed; I had never wanted something so bad and there I was facing a cesarean birth that I never thought would happen to me. Before being sliced open, I remember saying to the doctor “please do everything you can so that I can have a successful VBAC (Vaginal Birth After Cesarean) with my next pregnancy.” It was that soon that I already began planning for my VBAC.

Fast forward four years and I joyfully found myself pregnant with my daughter. It was not an easy four years to get to that point either. My husband and I struggled with infertility and miscarriage; I also suffered through bouts of anxiety and depression. I worked slowly through the layers of guilt, disappointment, and feelings of failure as I accepted my son’s cesarean birth. It was a difficult road but one I had to navigate if I wanted a healthy and happy subsequent pregnancy. Again, I began educating myself on VBACs, labor, and childbirth. I reread all my favorite Ina May Gaskins books. I followed excellently and empowering birthing blogs that were VBAC supportive and inspiring. Birth Without Fear (my favorite blog) became my battle cry. I ate healthily, stayed active, continued with yoga, received regular chiropractic care, and armed myself with the doula of all doulas. I knew that if this VBAC was going to happen I needed a skilled and experienced doula who could help me navigate potential challenges and surprises. Ursula was that final piece we needed on our team; my husband and I felt immensely supported and reassured with her skill set and attitude. I also continued my care with midwives and had realistic, open, and honest talks about my chances for a successful VBAC. While a vaginal birth was important to me, the end goal was a healthy mama and baby, even if that meant a repeat c-section.  But I wanted to do everything in my power to prepare for a successful VBAC.

Two days shy of my due date, I left work early after not feeling right. I came home to nap but began feeling contractions. At first, I was not convinced this was the real thing; I had been having prodromal labor off and on for a week or so now. But the contractions became more frequent and stronger as the afternoon waned on. It was looking like this was in fact early labor. My husband came home, arrangements were made for our son, and we called Ursula to check-in. Before I knew it, my husband, Ursula, and I were hanging out in my bedroom timing contractions and chatting about labor, a new puppy, and other topics. Ursula very calmly and casually brought up that if indeed this was labor and I gave birth today or tomorrow (which were all looking more likely) that our daughter would be Ursula’s 1000th birth.  I repeated that towards my belly and rubbed my stomach for a while. This was promising to be a very eventful night.

As labor continued we transitioned to the hospital. We arrived at the hospital at 7:30 pm and I was 9 centimeters dilated. But baby girl was still pretty high up there. Calmly I sat on the birthing ball riding the waves of contractions. My husband was holding my hand, Ursula was reminding me to relax and stay loose, and I was flipping through my birth mantras. This was going to happen. I was going to do this. I wanted this VBAC so badly and I was going to work the hardest I ever had for it. I was cautiously optimistic and determined. As the evening wore on, labor picked up. The baby was coming down slowly and steadily. My midwife Kelly was exactly what we needed that night. She was reassuring, firm yet compassionate and honest about the next steps we would take. Ursula helped me find different positions to labor in to help baby girl descend. After repeated trips to the bathroom, different positions, and lots of rocking on the birthing ball, my bag of waters ruptured. It was a huge gush and mentally a big hurdle that I sailed right over.  I was finally complete and feeling that urge to push—it really is almost uncontrollable. Pushing for two hours was exhausting and hard; there were moments of self-doubt starting to creep in. And baby girl still had to make that last dip under my pelvic bone. If I could make it through that hurdle, I knew I could push her out of my vagina.

We could see her head and all her hair. Kelly and Ursula had me in all sorts of positions and I pushed with power and strength I didn’t know I had. Finally, I heard those magical words I had waited for what seemed like forever: she’s right there. I could feel her head and everyone’s excitement around me was contagious. I exclaimed, “I can do this!” And I did. Flanked between Ursula and my husband I curled towards my baby, pushed with ferocity, and birthed that seven pounds six-ounce girl out of my vagina. I kept repeating “I did it. You’re here! Oh, baby, you’re here!” It was incredible! It was my empowering, healing, strong VBAC. I had worked hard for it. I had armed myself with the ultimate support team. It was Ursula’s 1000th birth and— perhaps ever so appropriately—a beautiful VBAC. It all worked out as I had hoped for. Healthy baby healthy mama and successful VBAC. I’m not naïve; I know that wanting it isn’t always enough. There are aspects of birth that are beyond our control. I’ve been on two very different sides of birth. And I know that each baby and birth is different. My son had the birth he needed and my daughter had the birth she needed. For months the wallpaper on my cell phone read “She believed she could so she did.”  And those words never sounded so true than when I finally held our baby daughter Elisa Sophia in my arms, blissfully relieved that she was earthside with my husband and me.

The story was written by Anne Koroknay and shared by Ursula.

← Birth of a Doula A Doula's Reflections on a VBAC →