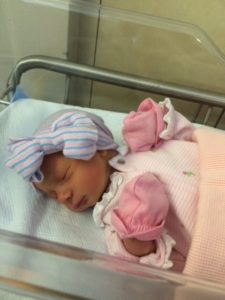 This mercifully brief tale begins on a balmy Wednesday in September.  September 23rd to be precise.  It was the Fall Solstice, Pope Francis was making an apostolic journey, something about a blood moon was going on–no way we’re having a baby during this series of cosmic coincidences.  Our baby, Nora, and the doctors at GW felt differently, however.

For several weeks before September 24th, we’d been monitoring Jane’s blood pressure.  It had been slightly elevated from her normal, barely on the charts, 90/65.  At her check-up on the 23rd, it was a remarkable 155/95.  Not high enough to induce panic, but elevated enough to merit further investigation (and, ironically, induction.  More on that shortly).  Considering how far along we were, 39 and 3, Dr. Sheth decided it was time to get more information on the blood pressure situation.

Luckily, Jane’s mom happened to come along for that visit.  The two of them did not stop, did not pass go, but instead went directly from Bethesda to 23nd and Pennsylvania.   Then I got the call.  I was waiting patiently in line at Chick-Fil-A on Pratt Street in Baltimore.  “Babe, we’re going to the hospital” chirped the voice on the other end.  “I’ll be right there,” I said, pivoting out of line like a crazed  Fred Astaire.  No chicken sandwich in hand, I immediately called Ursula.  My panic must have reverberated through the receiver because before I could even lay out the facts she pointed out that these next few days would be easier if I wasn’t perpetually hyperventilating.

Ursula’s doula magic having taken effect, I gassed up the car, stopped home for our hospital bags, and made my way calmly to GW by driving exclusively within the posted speed limit.  By the time I arrived, Jane was in triage, hooked up to various medical do-dads.  The most important one showed the baby’s steady heart rate. Whew.

Then, sat in behind the drawstring screen with the intern, medical student, and residents popping in and out, was one of the more surreal moments in what was three full days of awe tinged with consternation.  To the backdrop of several screaming soon-to-be mothers having arrived at the hospital too late to deliver in an actual room,  we looked up at each other.  Holy Sh*t in thought inwardly, we’re about to have our baby. I hope they don’t send us home, I don’t think I can handle it.

In that brief moment, I was, perversely I guess, elated when Jane’s tests came back with positive signs for preeclampsia.  We were staying.  The only treatment for that particular affliction is delivery.  So there you have it, we knew we were residing at GW for a few days and that our baby was coming.  A potent cocktail of Ursula and Pitocin would see to that.  I poured myself a mental Jack Daniels, but since we were now in the delivery room, settled for a dish of actual cranberry juice. 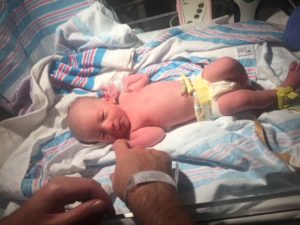 The night’s remainder was a blur, although I’m sure Jane would add that the blur was not a particularly easy one.  By Thursday morning, nature having been assisted by some minor medical intervention, the process was in full flight.  Jane weathered the increasingly regular contractions until mid-afternoon when she got a low-dose epidural.

I went out for pizza and by the time I returned dilation was almost complete.  When it was time to push in earnest, I grabbed Jane’s head, her mom took one leg and Ursula the other.  There were approximately fifty-nine minutes of pushing before I could see the tip of our daughter’s head.  At one hour, I was prepping myself to catch the baby since the probably 700 square foot delivery room contained, at that time, one nurse, one Ursula, me, and Jane’s mom.  By one hour and one minute the cavalry had arrived, and so too did Nora, some three pushes later.  A little suctioning, a little skin to skin, and a little champagne later, we meandered, ever so dreamily, to postpartum.  The rest, as they say, is history.

This story was written by MG, Jane’s husband (and yes- Jane is an alias)